The remote voting system is Blockchain-based distributed system developed to enable migrants and other in-service voters posted at different locations to cast their votes from their place of work (Host Constituency) without commuting to their Parent constituencies, thereby saving time and money, and enabling higher voter turnout. A Proof of Concept (PoC) was developed as per the directions of Election Commission of India and demonstrated. 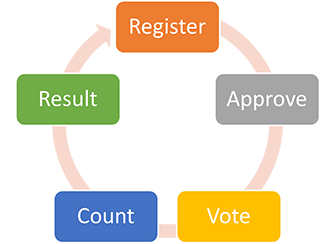 The system enables secured storage of details of remote votes, ballots, and encrypted vote in the Blockchain. The returning officer of the parent Constituency only would be authorised to download all encrypted votes from the Blockchain on the day of counting and decrypt the same to count the votes.